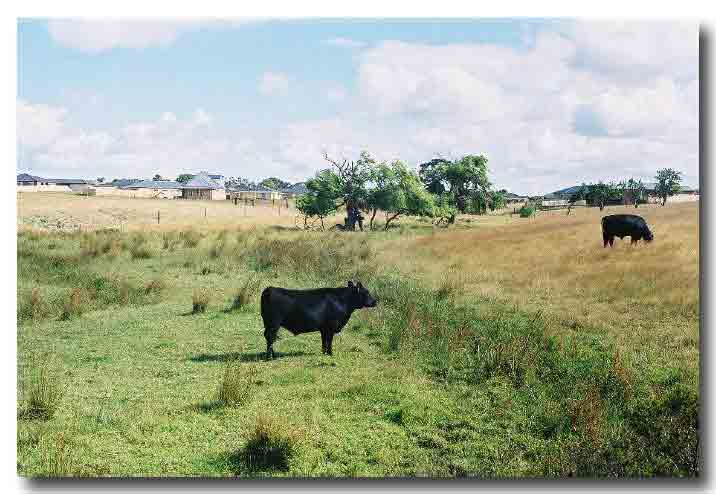 the edges and margins of suburbia; how the suburbs creep into the farmland and how that farmland is reshaped and transformed into estates with names like ‘Cresta Views’ by corporations with that sound like they’re out of cartoons like Akron. It’s been happening in the area near where I live and I’ve been taking some photos and trying to write something about the reshaping of the landscape that’s going on here.

I grew up in the northern suburbs of Melbourne in the early 1960s when Melbourne was already spiralling outward as it still is today. In those days you bought a house at the newest edge of the suburbs and built; just a little further out than your parents perhaps. My friends and I would roam the edges of the suburbs around Glenroy as far north as Broadmeadows; it was a parched prickly landscape of fields laced with the tracks for paddock bombs to race, a landscape of thistles and stones and danger, bisected by the natural delineation of the Moonee Ponds Creek and the unnatural boundary of the train line north, and the forbidden Trestle Bridge.

It was the edge of the suburbs, a kind of no-mans-land between the straight lines of the streets and avenues and the almost borderless world of the bush. It was an anarchic place where paling fences in a row marked the edge of the rule of order and where old barbed wire fences, stone walls or lines of pines marked the end of an old order.
​
Much later, when those places had been built over I became interested in those lost landscapes and wrote about them in poems. The lure of lost landscapes extended to imaginary places like Atlantis and to the lost landscapes of childhood at other times.

Poems from the margins

​The apple has been replaced by the vineyard
and the stencilled pine boxes by the French oak.

They are bulldozing the orchards into piles
and the sign-writers are learning to spell ‘boutique’.

Everywhere they are planting treated pine in long rows
and threading strands of silver wire for grape vines.

Some place else has been turned over to food,
and this place is losing its connection with itself;

somewhere in a forgotten field that nobody owns,
rows of apple trees grows wild and bitter.

Views of a Crest

What the Aakron Construction Company,
with their industrial yellow matchbox collection
are walling in or walling out
is just landscape.

Outside, redundant contours rolling lines,
sweep of distance where the creeks went.
Inside, the fashionable curve of a future road
altered lines grids of quarter acres.

Enter the old paddock via the new brick gateway.
Cresta views is perfectly flat.
You don't get the name at all,
until you see a crest in the distance.
That's it: there's a view of a crest.

At the end of my street
blackened mussel shells
layered white under earth
on the track to my beach
I read Gwen Harwood
about Oyster Bay
without connecting;
is this dispossession? 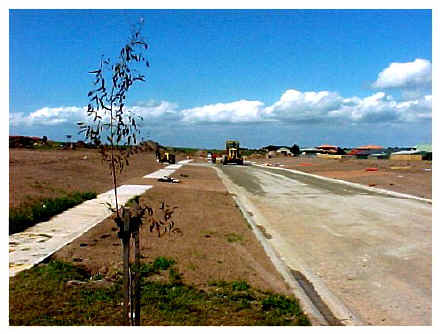